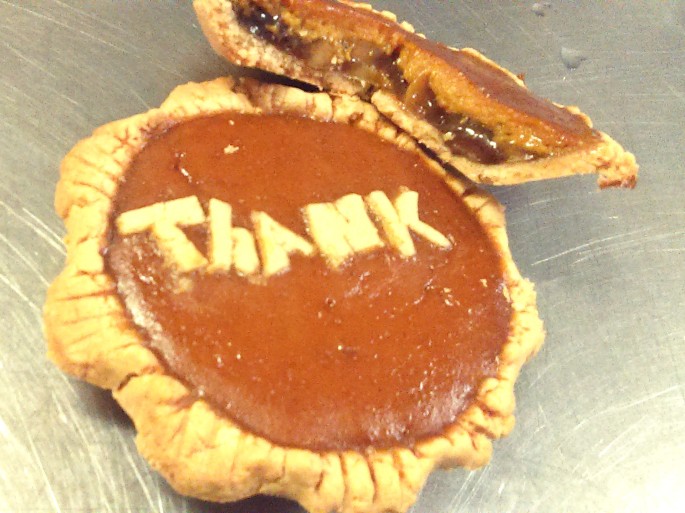 It is pie season!

That means my slight obsession and love of pies is completely acceptable and beneficial! It also means my spare time and day dreams  are filled with pie ideas and of course baking them. Last week I spent Wednesday baking up all my pumpkin and apple combinations. Then I switched it up Thursday and made ALL my pies out of cranberries.

Not only do I have all these pies to sell, but mostly I made them to share with you!

This pie was a sleeper for me. I wasn’t as enthused for it as I was for some others (I was pumped for the Chocolate Cranberry Pecan I have coming later this week). I will be honest that the real lack of enthusiasm is because I am not a pumpkin pie fan. However, this apple filling was delicious! And  it harmonized beautifully with the pumpkin. It added more flavors and another texture. This all made it one of my favorite pies out of ALL of them.

Plus there seems to be some very traditional pies this time of year. At work I have been making apple, pecan, pumpkin and cherry. So it is nice to combine some, so you don’t have to make so many individual ones!

How to Make it Happen:

Make your favorite crust recipe. Divide into small balls. Flatten into disks. Press evenly into mini pie pans. Flute edges. Place in the freezer while you make the filling.

Chop the apples. Cook in a skillet on medium heat with the ghee, coconut sugar, and cinnamon. Whisk the tapioca flour and water. Set aside. Once the apples are cooked and starting to bubble, add the tapioca blend. Stir, remove from the heat, and make the pumpkin filling.

Whisk all the pumpkin ingredients together.

Spoon apple into the bottom of the crust. Pour pumpkin filling over the apples until it reaches the fluting.

I used some of the extra pie crust to cut out little toppings. Place gently on the top.

Bake at 325 fro 30 minutes, until it is no longer jiggly, but not cracked. Allow to cool. Refrigerate for an hour before eating.