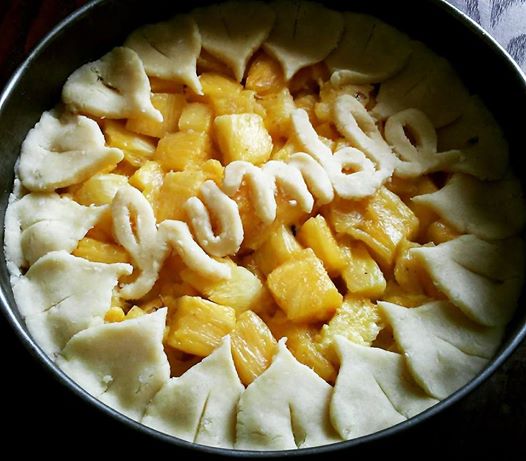 Pies are kind of my thing, hence my business being named P3: Polifroni PIES and Pizzas. They are my favorite thing to make.

When I started working and researching to make a gluten-free pie cookbook last Spring, I found a recipe for pineapple pie.

It’s been in the back of my mind ever since to try.

And Saturday, my mother-in-law planned a little cook-out and I thought what better time to try the pie then now!

I had some unsweetened shredded coconut in the cabinet, which I thought would be a great addition to the tropical fruit.

I also thought that ginger added to the pie filling would be a nice subtle addition.

I also don’t know where my pie pan is (I usually make mini pies for my business), so I decided to make a deep dish pie, using a spring-pan (I have lots of those pans since I made 9 cheesecakes last year for our wedding reception). Plus that morning I saw a deep-dish pie on my Pinterest. I really want some mini spring pans to try mini deep-dishes!

And as for decoration, I couldn’t flute a border since I wasn’t using a standard pie pan. I decided to try and mimic the outside texture of a pineapple for a border. I didn’t know how it would bake with such an open top, so I decided to add some lettering. I once saw one tagged with a ‘humble’ label and I thought that would be a nice addition.

Make pie crust according to the recipe, plus add coconut. Refrigerate at least 30 minutes.

Cut the pineapple, I cut decent sized cubes, but if I made this again, I would chop them smaller. Toss in a saucepan with the remaining ingredients. Cook on a low/medium heat until they start to thicken. Remove and cool slightly.

Pat the 2/3 of the pie dough into a spring pan, placing an even layer and coming at least halfway up the sides of a spring pan.

Pour in the filling.

Roll out the remaining pie dough and free hand leave patterns and a word. Or whatever decoration you would like.

Bake at 350 for 45 minutes. Until the crust is golden or browned and the pineapple is bubbling. If the crust is getting too dark (as mine did), cover it with aluminum foil and continue baking.

Cool and allow it time to set before slicing.