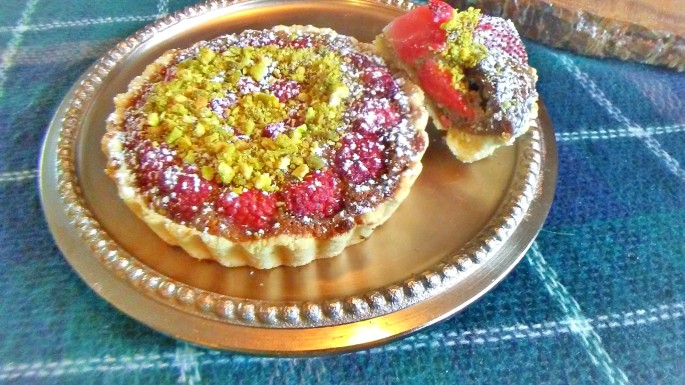 As I’ve mentioned, I have a bit of a British Baking Show problem (is it a problem though if it leads to delicious food, high creativity, and beautiful treats?). It has inspired me A LOT lately. Choux. I’ve got an upcoming eclair recipe. I really wanted to try that one.

I also like pastry week. Some may know, pies and tarts are kind of my all-time favorite thing to bake (hence my company being called P3: Polifroni PIES and Pizzas). I was really intrigued with the frangipane. It’s not something you see a lot here in the Midwest, actually I have never seen one offered anywhere. No restaurants. No bakeries (which there are a lack of actual bakeries in my town-not the premade and just-bake. Those do not count). So my experience with frangipane only comes from TV and then searching for it on Pinterest.

Last summer I made my first frangipane for a market. It had a lovely rhubarb lattice on top (pictured below). The feedback was a success. Most gave me a clueless look when I said there was frangipane underneath the rhubarb. But they were all pleasantly surprised that they liked the flavor.

And so we arrive at least week. I had quite a lit of pistachios left and I thought they could be cool to add to the almond in the frangipane. I also had a few things of berries. I gave it a go. One mini tart with strawberry, one mini tart with raspberry. I took them to my Bible Study class (because Zach and I cannot eat all the stuff I bake). It did get some foreign looks, but upon my husbands urging (I am training him well to know his way around some desserts, granted he knows a lot already), some others decided to taste it. Interesting. It was definitely not what they expected. And it did pack a great amount of flavor with the berry and pistachio. Another key, is a thin layer of pastry. Pastor Sonny said he would not have known the crust was gluten-free if I wouldn’t have said anything. To me the success for the pastry is to process it in my food processor (I typically would like to do it by hand, but the processing is a superior texture) and to spread it evenly and thinly.

Once again, the great thing about it is once you get hooked on frangipane there are SO many flavor combinations you can try. Chocolate and apricot. Plum. Pears (maybe with a caramel glaze). Maybe try adding in some additional nuts. Maybe some macadamia nuts with mango? And as I’ve mentioned the rhubarb is divine as well.

Roll out pastry into a large tart or several small tarts. Refrigerate.

Beat the butter and coconut sugar until light and fluffy. Add eggs and almond extract. Once combined, add the almond flour, arrowroot flour, and pistachios. Spoon filling into pastry, smooth. Cut raspberries in half. Layer in a circle and then a smaller circle inside. If making a larger tart, you will get more layers.

Bake 20 to 30 minutes until golden and when the almond is set,  for tartlets or 45 to 55 for a larger tart. If it is browning too quickly, place a tent of foil over the top.

Once it came out, I sprinkled some ground pistachios between the layer of raspberries.